​​​​​​Written By Amanda Cline for MotorBiscuit
Just like restomods and modified cars have a place in the market, electric vehicle conversions are becoming more commonplace. This year at SEMA 2021, the Ford F-100 Eluminator truck with a Mach-E electric motor made a big splash. But there is a big market out there for classic car to EV conversions that seem to be heating up. 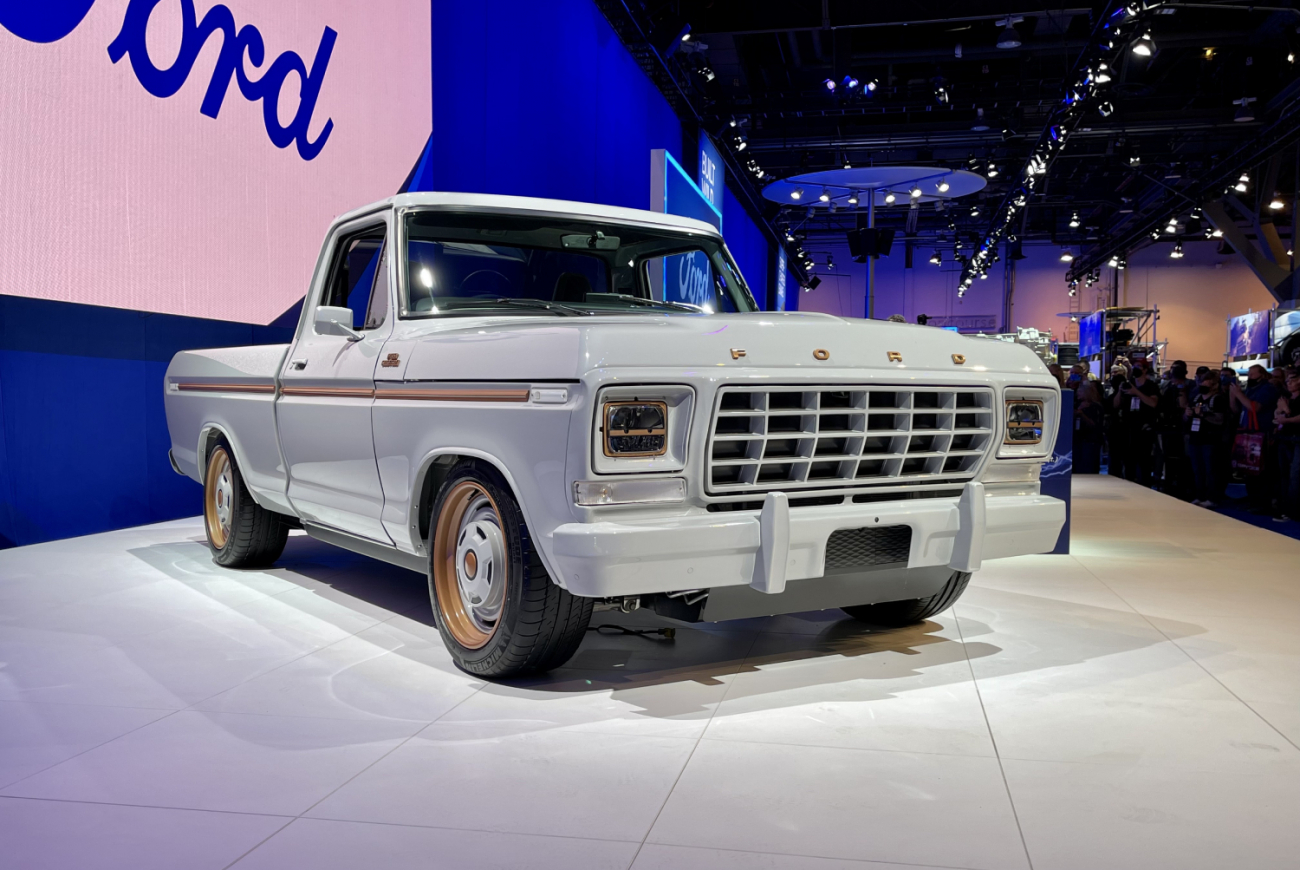 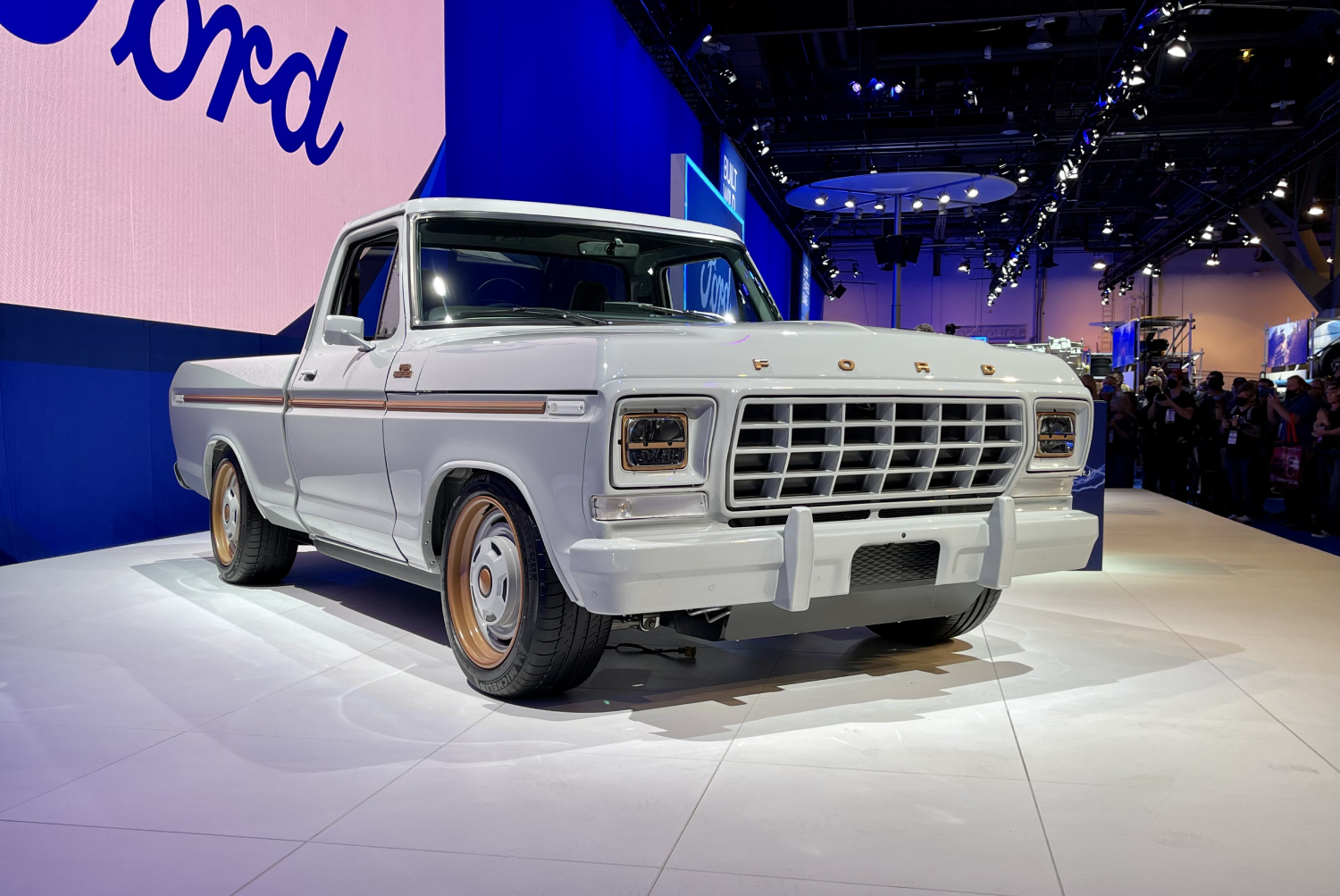 The Ford F-100 Eluminator truck | Amanda Cline, MotorBiscuit
Ars Technica investigates one of the ways people might bring new life to old cars, such as electric vehicle conversion. The idea of an EV powertrain conversion is the process of taking a vehicle from conventional gasoline power to an electric motor. At the most recent SEMA show, Ford displayed the F-100 Eluminator truck with a Mustang Mach-E electric crate motor.

Mark Wilson, Ford’s vehicle personalization manager, said, “If you look at the life cycle of ICE [internal combustion engine] products in the long term, there appears to be an end date on the horizon—a point at which they’ll be phased out.” Wilson went on to say that these ICE products will become obsolete at some point.

The 1978 F-100 turned F-100 Eluminator truck had nostalgia attached to the truck itself, but the engine was not noteworthy, per se. The M-9000-MACHE motor is $4,095 and is available directly from Ford Performance.

Michael Bream of EV West, a company doing electric vehicle conversions in California, said he was interested in the Tesla Roadster. “As a computer engineer and hot-rodder, I was kind of enamored with the technology involved. I wanted to see what was possible with electric performance.” Bream notes that when such ideas first came about, some solutions were not feasible.

EVs like the Nissan Leaf and Chevy Bolt EV helped create purpose-built solutions at an OEM level. “That has helped to refine the EV experience a lot. It has also brought in higher-quality parts at lower costs, and that in turn has brought more affordability to the EV restomod market.”

Jaguar even made an official 40 kWh lithium-ion battery that directly replaced the current gas engine in the Jaguar XKE. This electric vehicle conversion was too expensive to make sense, but it sounds like it could work with some more testing. This type of conversion is gaining speed in the aftermarket scene, but it could still use some OEM backup. Getting access to a battery is going to be a significant breakthrough. Bream says that parts for converting a classic car into an electric vehicle can cost anywhere from $20,000 to $25,000. That still uses the original transmission and doesn’t include the labor.

Smaller cars like an air-cooled Volkswagen or Porsche 911 work well for this kind of electric vehicle conversion. The new build can reuse the original manual transmission and other drivetrain components. That gets a little trickier and more expensive for heavier cars.
David Beckham made the news last year when he invested in a company called Lunaz. Lunaz focuses on converting old British gasoline-powered vehicles and making them into zero-emissions electric vehicles.

The company’s transitioned vehicles include a 1961 Rolls-Royce Phantom V. The company can take both fixed head and drophead body styles of the Silver Cloud I, II, and III. Another option is the Bentley Continental, both the coupé and four-door ‘Flying Spur’ body styles. Lunaz worked on the Jaguar XK120, XK140, and XK150, turning these vehicles into sustainable and drivable classics. Of course, these conversions will set you back $300,000 to $700,000, depending on the car.

There are more options for electric vehicle conversions than ever before and many companies are working on it behind the scenes. Project cars might not need gasoline engines in the future.

At MotorBiscuit, our mission is to inform and entertain our readers with the latest automotive news, reviews, and buying advice. That means providing you with straightforward articles that are engaging and well-informed. Whether you’re looking for information on a potential purchase or an explanation of what’s going on in the news, we work hard to cover each topic in a balanced way, giving our readers insights they can trust.
Back